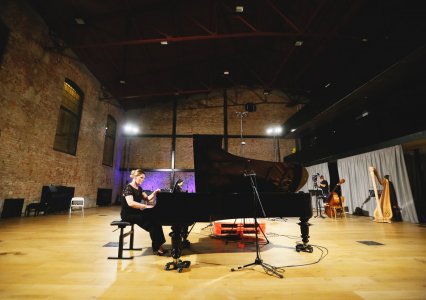 After a brilliant previous season, the Cantus Ensemble announced a new concert cycle for the 2019/2020 season to be held at the Lauba in Zagreb, which will include five concerts performed from September 2019 until June 2020.
The season will open on 23 September with the first concert of the cycle. The concert, appropriately titled Maple Syrup, led by the Canadian conductor Owen Underhill will present the contemporary compositions from the distant Vancouver. The great Canadian cello star Ariel Barnes will be a guest performer at this concert. On 16 December, at the concert titled Minestrone alla Italiana flutists Ana Batinica, Dani Bošnjak and Roberto Fabbriciani will perform five compositions by contemporary Italian composers with flute in the foreground, from solo performances with a chamber ensemble all the way to an unusual combination of three bass flutes with live electronics.
Concerts for the next 2020 year are also announced. Chiles en Nogada, dedicated to contemporary Mexican music, is scheduled for 24 February. Contemporary music icon, violinist Irvine Arditti, will join the Cantus Ensemble with performance of the composition by the Mexican composer Hilda Paredas. The program will also feature a composition by Julio Estrada, Bajo el volcán, for as many as seven double basses! On 4 May, the French ensemble Proxima Centauri will also participate in the cycle, while the Sachertorte concert, led by conductor Ivan Josip Skender, will close the cycle on 8 June with contemporary Austrian music. Tickets are available on the day of the concert at the Lauba box office.

Concert cycle Cantus@Lauba is supported by City of Zagreb and international activities by Ministry of Culture of the Republic of Croatia.